Theory of Yin and Yang

The concept of Yin and Yang is the most important in Traditional Chinese Medicine (TCM). According to this concept, all phenomena in the entire universe can be classified in two opposites, Yin and Yang, which are part of the same unit. This theory is the foundation of diagnosis and treatment in TCM, together with the theory of the Five Elements.

Yin means: negative, female, passive; north or shady side of a hill; south of a river.

Yang means: positive, male, active; south or sunny side of a hill; north of a river.

Four lows of Yin and Yang 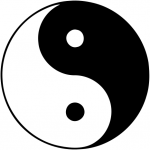 Yin and Yang in Pathology

When Yang does not warm and activate Yin, this can cause cold limbs, hypo-activity, poor circulation of blood, pale face, low energy, etc.