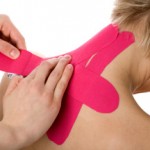 Taping is the use of adhesive cotton tape on the skin, according to specific paths and a specific tension, to relieve pain and reduce edemas. The tape lets the skin breathe, is hypo-allergenic, water resistant and does not contain any kind of medicine. It is a technique that supports different kind of therapies and its aim is to stimulate the normal healing process of the body. There are hundreds of different applications and paths to be used with taping.

It is used in various fields, like medical, paramedical, rehabilitating and sports. More specifically it is used: 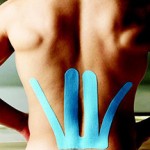 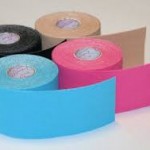 The taping technique was invented and developed 35 years ago by Doc Kenzo Kase, a Japanese chiropractor, to overcome the limits of the rigid sports taping. The method gained popularity during the 1988 Olympic Games in Seul, during which it was applied to the volleyball Japanese national team. From that moment on it became more and more popular throughout the world.

The application of taping can be divided in two main groups:

Stabilizing – It is used during a performance in case of muscle pain, to stabilize a joint and for postural rehabilitation (neurological feedback). The tape is applied with a range of tension from 50 to 90% .